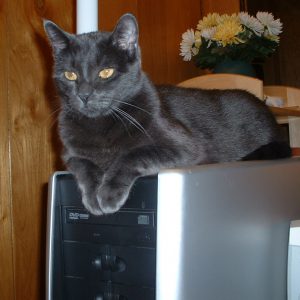 There was no warning. Monday my beautiful cat Cricket was fine. Tuesday she didn’t come to get her breakfast – I called her from the kitchen first, as usual, and when she didn’t show up I figured she wanted her food upstairs. I went up to my office door and called again, but still she didn’t appear. Not till I sat down at my desk did I see her, way back under the desk.  I’m unable to kneel so I couldn’t get her out, but I was able to put the cat food bowl near her. After a few minutes she got up, sniffed at it, and walked past it, settling down still too far away for me to see her. As she is a very dark gray with black overtones, I couldn’t even get a good look at her.

I was concerned, but the last time she got lethargic and I took her to the vet, they couldn’t find anything special wrong with her, and the next day she was fine again. It was an expensive visit because they did a lot of blood work, so I wasn’t going to make the same mistake again. I’d wait and see how long the lethargy lasted. END_OF_DOCUMENT_TOKEN_TO_BE_REPLACED 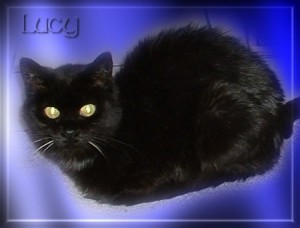 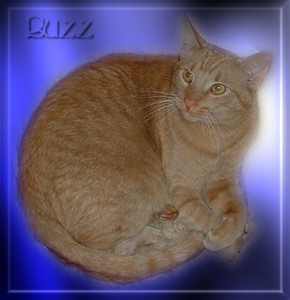 Biggest and youngest of the three cats, Buzz also has the highest voice – and though he doesn’t whine for food, he becomes hysterically vocal once Mommy has the cat food can in her hand. Purring and meowing at the same time, he stands on his back legs, stretched up as high as he can go, his tail vibrating furiously, until the food is in his bowl. Then he attacks the food and has cleaned the bowl (he gets a full can of Friskies filets in gravy) in about 90 seconds. Occasionally, however, he sniffs it and then diligently tries to cover it up. By that time I’m preparing to feed END_OF_DOCUMENT_TOKEN_TO_BE_REPLACED