(Continued from Coronary Artery Disease? From Where?)

After the stress echocardiogram, Erika, the PA I see at my doctor’s practice (what, see the doctor? Once in half a dozen blue moons!), sent me a message saying she wanted me to have an angiogram as soon as possible. When I called the cardiology department, they wanted me to wait about three to four weeks just for a consultation.

So I called Erika and left a message telling her this and saying, basically, “Didn’t you want this done sooner than that?” Then HER nurse called me back and we went through the whole thing again, and damned if I couldn’t hear Erika in the background – so why wasn’t she talking to me? Anyway, someone, somehow, leaned on the cardiology department and got me an appointment the following week for a consultation with Dr. Cohen’s PA.

From then on, things sped up considerably.

Suddenly It Was All Happening At Once 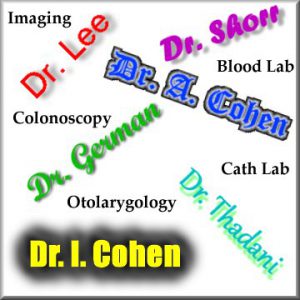 Some of my 30 doctors, tests and procedures.

Actually, both October and November 2017 were insane months for doctors anyway. In addition to the above-mentioned consultation and angiogram, I had 9 other medical and 2 dental appointments in October, and 18 appointments for doctors, procedures and tests in November. I had a colonoscopy and a videonystagmography. I had a CT scan of the knee I had replaced last year because it still frickin’ hurts, as well as even more blood tests.

I had to have a crown put on a lower back tooth because if I didn’t, I was going to lose it. My dental insurance had, for some unknown reason, denied the claim when it was submitted for approval. Now I had no choice. I had to stop wearing CPAP for sleep apnea because the headgear had caused a serious skin condition to flare up, so now I was going to get a dental apnea device instead – except the crown had to be done first.

For the second time the gastroenterologist (digestive system doctor) found and removed a polyp. The last one was benign and I expect this one will be, too. I will find out the results of the other test (done because although I am not at all dizzy, my balance is getting worse again) this week.

And while all this was going on, I was also meeting with a lawyer to set up my estate. In fact, I had the last meeting, where I signed all the forms, on the morning of the angiogram. It wasn’t that I expected to die. I do not intend to die for a long time. But this is something I’ve wanted to get done for 20 years – my only previous will is back in Iowa somewhere, woefully out of date. In addition, I was getting a Healthcare Power of Attorney, and that seemed rather important just now.

They knew, from the results of the stress echo, that there had to be some coronary artery blockage(s), possibly severe. What they didn’t know yet was the extent of such blockage(s) and whether they could and should be treated with angioplasty – the balloon surgery that opens up the artery where it’s blocked.

They said they were going to give me “twilight” anesthesia, but I don’t believe I ever lost consciousness. Then instead of inserting the little bitty tube with the teeny tiny camera on the end through the groin and thence to the heart, which was the only way I’d heard of the procedure being done, they went in through my right wrist. ICKY! I’m right-handed, for the love of the gods! Well, more on that later.

If they were going to do angioplasty, it would be done immediately. But Dr. Cohen did not go on to that step. What he told me later (I swear this is what he said, so maybe I was more out of it than I thought) is that one coronary artery is completely blocked with a very hard substance, too hard for angioplasty to work, and a second is partially blocked with the same concrete-like substance. However, he said, a sufficient number of “collateral” arteries had grown, so that the heart muscle is still getting blood flow. It’s not as good as it used to be, but doesn’t require immediate intervention (such as bypass surgery).

Easy for HIM to Say

What had to be done is to get my cholesterol levels lowered, my blood pressure down, and my health improved overall, via diet and exercise. The way I remember it, he was rather fierce as he told me, “You WILL lose weight!” Or was it “MUST”? I recall the vehemence better than the words.

Yeeee-ah. I’ve only been trying to do that for more than 20 years. I need to lose 80 pounds. Once I lost almost 30, but it was on the most monotonous diet I’ve ever tried, and I just couldn’t keep it up forever, especially when severe depression set in. Walking 80 minutes a day for most of one summer had lost me not a pound and not an inch. A 9-week heavy-duty exercise program – ditto. An expensive diet program – I lost 2 pounds. Cost: $1,000 per pound.

The problem was, I gained all this weight from psych meds – and the last 40 or 50 pounds came from Seroquel (quetiapine in generic). Seroquel makes it really easy to put on weight, and damn hard to lose. But glory be, I am not taking it any more!

And now the motivation has changed. No longer is the reason I want to lose weight because I look like a freakish old woman who is 11 months pregnant. Now it’s because I want to be around as long as possible for my kids.