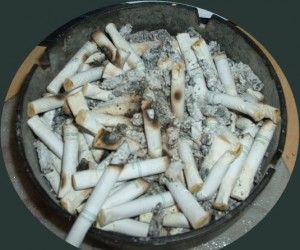 There’s one more drug that has a very good record in helping people quit smoking: Chantix. But my doctors refuse to prescribe it because of my bipolar II disorder, and I agree with them. My current meds’ control over my BP and anxiety is precarious enough without adding a drug known to cause problems to people with mental illnesses.

In 2008 the makers of Chantix issued a warning that patients “should be observed for serious neuropsychiatric symptoms, including changes in behavior, agitation, depressed mood, suicidal ideation and suicidal behavior.” This was, according to the statement, especially true for patients with pre-existing psychiatric conditions.

All this came from post-marketing experience – that is, reports of problems that came in after the drug was already approved. Before approval, nobody with mental illnesses had been included in the clinical trials.

Then in 2011 the warning was strengthened. Chantix had been on the market for 3 more years, and serious symptoms had appeared in people who did not have pre-existing mental health problems. The warning that appears on patient handouts and information given to doctors is:

Some people have had changes in behavior, hostility, agitation, depressed mood, suicidal thoughts or actions while using CHANTIX to help them quit smoking. Some people had these symptoms when they began taking CHANTIX, and others developed them after several weeks of treatment or after stopping CHANTIX. If you, your family, or caregiver notice agitation, hostility, depression, or changes in behavior, thinking, or mood that are not typical for you, or you develop suicidal thoughts or actions, anxiety, panic, aggression, anger, mania, abnormal sensations, hallucinations, paranoia, or confusion, stop taking CHANTIX and call your doctor right away. Also tell your doctor about any history of depression or other mental health problems before taking CHANTIX, as these symptoms may worsen while taking CHANTIX.

It’s worth noting, too, that Chantix tops the list of drugs known to be associated with violent behavior by a wide margin.

I don’t know if my primary care doctor and/or my psychiatrist have had direct experience with patients taking Chantix and having such severe side effects, but both of them said “Absolutely not” when I mentioned the drug. And after my miserable experience with bupropion, I’m not exactly thrilled about taking something that has the potential to wreak havoc on my mental and physical condition (sleep issues are also prominent side effects of Chantix).

So what do I do? I like to smoke. I don’t have any dedication to quitting. All I can think of is to find the e-cigs, find the new charger, and give vaping another try… but I don’t feel very confident about that.