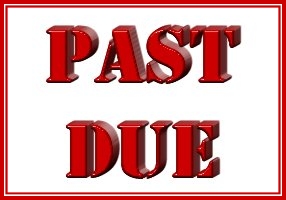 For most of my adult life I was diligent about opening mail and dealing with it. Before online banking existed, I paid bills every Saturday, and later, used my financial software to have the bank send out checks. I was responsible.

Then it all went to hell.

For the last several years the avoidance of opening mail and dealing with it after it was opened (two separate tasks) has been a serious problem. For the first time in my life I was paying bills late. That’s when I set up all the automatic payments, which took care of some of the problems.

But I was still routinely late paying medical bills and others that couldn’t be paid automatically. I had several severe health problems as well, so there were a lot of medical bills.

When, after an extremely serious illness, I hired professional organizers to solve the issues that I could not (and had not been able to solve for years), one thing that was included in their services was helping me deal with paperwork. Since then Gail, my “personal” organizer, comes back every 6-8 months to tackle disorganization that is new, tasks we put off, and – paperwork.

I’ve let my mail pile up for as much as three months – insane! I get packages – things I ordered – and don’t open them. I have seven of those right now.

Worse still, when Gail and I do go through the mail and make an urgent stack, it just sits. The one I have now actually contains checks to be deposited. Money! In the past we have found checks in the mass of mail that were so old I wasn’t sure they’d be honored, but when I actually have them ready to deposit, why do I let them sit there?

How bad is the problem?

Currently I have a stack of unopened mail 2½ inches high and another stack of opened mail to be dealt with ¾ of an inch high and, as I said, seven unopened packages. I also have two boxes that need to be returned for credit sitting on my living room floor. This situation has gone on for years.

I also haven’t updated my financial records in months – how could I, when I don’t look at credit card statements?

In late 2008 I moved into the house of my dreams. I hate to think that this event, though it was extraordinarily stressful, had anything to do with my mail difficulties. The only factor that might contribute is that for the first time in my life I don’t have a mailbox attached to the house. My box is out at the street. And because it wasn’t just a matter of opening the front door and bringing in the mail, I began going days between emptying the mailbox. The box would fill up.

Thus when I brought the mail in, there’d already be a big stack. (One time the carrier came to my door because there was no more room in the mailbox.) At first I would purge the mail before ever getting into the house, putting it on the trunk of my car in the garage and sorting through it, tossing the garbage right into the recycling bin from there. But even that stopped eventually. (And my new car is a hatchback so there’s no trunk to sort mail on.)

In May 2009 I descended into a deep depression that lasted for months and turned out to be caused by undiagnosed diabetes. Once I had my blood sugar controlled, my mood improved dramatically. I can’t remember whether I began ignoring mail then or not.

I only know for sure that I needed the organizers in 2010 when I was so weak from illness it was hard even to do simple household tasks. Maybe that illness is what started it. I was in the hospital for 5 days in March, then had outpatient surgery twice in the next few months. Recovery was very slow, and it was in October that I hired the organizers.

And in 2011, all online services (including check paying) for Microsoft Money were discontinued, meaning I had to hand-write checks again. Hell, did THAT precipitate my slowness in paying bills?

Well, lack of self-discipline has been a problem for a long time – longer than the issue with mail has existed. Recurring depression has a lot to do with it BUT – before I began taking medication for depression, I was still responsible with mail and money.

One factor I have to include is that I haven’t had a day job since 2005. Outside-the-home jobs provide structure that can be extremely difficult to create on one’s own – which has been devastatingly true for me. 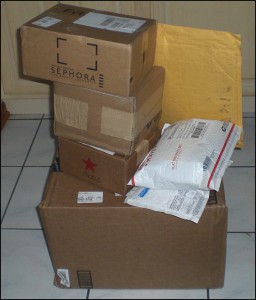 How do I deal with this?

Right I have the mail sitting on my desk wanting attention, and as I said, there are seven packages downstairs. I’m actively resisting doing anything with all of it. I’m acting like I’m afraid to open anything, but that’s not the case.

Anxiety is a big issue for me, but if the root cause is anxiety, I can’t tell. It’s more “I absolutely do not want to do this.” And I just don’t understand why.

I remember something my counselor told me: “Action before feelings.” In other words, even if you don’t feel like doing something, go ahead and do it because you’ll feel good when it’s done. I know it’s absolutely true, but that knowledge doesn’t translate into action.

And once the mail piles up, it’s much easier to add to the stack than to deal with the new mail. “Oh,” I think, “I need to open the older stuff first.” Well, that’s a fallacy, Marcia. It’s certainly possible to keep the stack from getting any bigger day by day. Take care of the new mail.

“I’ll do it when my desk is clear” is another thought that blocks me from action. Currently my desk is almost clear, but apparently it’s not clear enough for me to break through my inexplicable resistance.

I should be disgusted with myself for being so irresponsible – and I’m not.

I’m at a loss. I can’t explain it, and I don’t know how to fix it. Somehow, the resistance is stronger than the self-disgust. Yet I always prided myself on being responsible with money. I just don’t understand why I have this problem – or why, apparently, I don’t want to do anything about it.