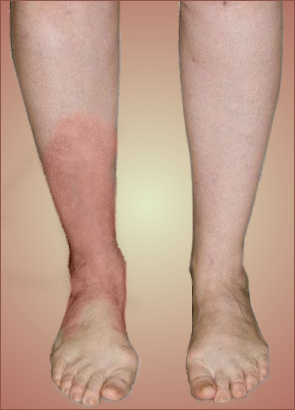 This isn't my leg, but it's a good rendering of what my leg looked like.

Two days ago I woke up with serious pain in my right ankle. When I looked at my leg, it was red halfway up the shin – and very hot to touch. The ankle pain, below the big bones on either side, was very sharp with movement.

I was scared. The first thing I thought of was that the rash could be caused by Lamictal, which I’ve been taking for some years. I know even though that in almost all cases, people who get a rash from Lamictal have been taking it just 2-8 weeks, but there have been isolated instances where rash occurs after longer use. And those rashes are no joke – they can be disfiguring, crippling or even life-threatening.

If you’re taking Lamictal and a rash appears, prompt treatment is essential. I went to the local Emergency Room.

After X-rays and an ultrasound to check for blood clots (that idea scared me, too), the doctor diagnosed cellulitis and put me on the antibiotic clindamycin four times a day for seven days. I’ve learned that cellulitis is an infection of the skin and its deeper layers. There’s a variety of causes, generally staph and strep bacteria. It can be fairly mild or quite serious. The doctor drew the outline of the red area on my leg and foot with ink and she told me to go to the hospital if it spread because I’d need to be admitted for IV antibiotics.

Two days later, the antibiotic seems to be working. There’s less heat in the red area, which seems smaller, though it’s still quite painful to even a light touch. Moving the ankle is less painful. I did find that I’m unable to wear a sock on that foot – the least pressure really hurts the swollen, tight skin.

What caused it? No way to tell. All it takes is bacteria getting into even a tiny break in the skin. There is a much darker area about an inch by a half inch that is raised and hard that might be where it started, although if that’s it, the infection spread down a long way yet not very far up.

Literature says the lower leg – particularly the shin – is the most common place to get cellulitis. I did a little looking around and found it can be much more serious than my case, causing high fevers and intense pain. I’m really glad I got it looked at immediately.