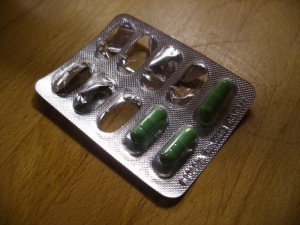 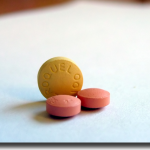 Eventually we found a drug that really worked well for my persistent depression without causing hypomania – Seroquel (generic quetiapine) (seen at left). Mentally I felt much, much better. Physically – I gained another 35 pounds. Seroquel is notorious for causing significant weight gain.

I tried a lot of different ways to lose weight.

Finally, in 2007, I started tracking calories and exercise. Over 11 months, I lost 20 pounds: down to 175, but then two things happened. (1) I hit a plateau. (2) Radical changes in my life led to dropping the good habits I’d developed.

Gradually over the next several years my weight crept up – and my height went down as I aged. I went down to 5’8”. To me that meant I had to weigh no more than 125 to look the way I wanted. Then another drop, to 5’7”. Now I need to get to 120. And, not surprisingly, I was diagnosed in 2009 with type 2 diabetes. That does run in my family, but I have no doubt the massive weight gain contributed to it.

Late in 2013 and early in 2014, for no apparent reason, I dropped 23 pounds. I was pretty damn pleased about that… but then I slowly gained 30 pounds. I am now back at my highest weight ever, 205, and 3” shorter than when I last weighed that much.

My doctors are all extremely worried, because 85% of the excess weight is in my belly, which is dangerous. I’ve had tests up the ying-yang, and all the results have come back normal. But my psychiatrist and I are very uneasy about the idea of dropping Seroquel from my medication cocktail because it works so well for me.

Then yesterday I saw this video about a young man who had lost 270 pounds over 6 years but was left with all the extra skin and stretch marks from his 270-pound body.

And it made me feel ashamed. I hate my body. I hate the way I look. Nobody believes how much I weigh because I dress well to hide it – but I can’t hide my face or the double chin beneath it. Yes, I’m much older now, but damn it, my friend JoAnn who walks every day and eats only healthy food is my age and she looks 20 years younger.

Yet I’m not doing anything to lose weight.

I was really, REALLY hoping that some of the tests the endocrinologist ran would find a reason for why I am carrying so much excess fat. I have all the symptoms of a cortisol problem, but the test results didn’t indicate one.

Seems to me I have two choices only: liposuction (which idea scares me to death, thanks to an episode of The X-Files), or doing what I did before: count calories and keep track of the time I spend at exercise – even housework.

I’d love to be able to walk in the forest preserves again, but at present severe back problems make that impossible. And I have no interest in swimming, which is one form of exercise I could do (I think – haven’t tried it). I’m a lousy swimmer, and too embarrassed to appear in a bathing suit anyway (I look 10 months pregnant). Cardio and weight work are out, too, because of my back.

But now, young Matt’s video has shamed me. I couldn’t do what he did – expose my body to the public. He, on the other hand, not only had that courage but had lost 270 pounds.

I need to lose about 80 pounds. To do that, I need to stop living on Starbuck’s bottled Mocha Frappuccino (4-5 a day right now), cheesecake, raisins and other sweets and carbs.

The benefits of losing weight are many!

So here’s the question: Am I ashamed of myself enough to do that again? Or would I rather indulge myself with delicious and fattening foods and continue moaning about my overweight when I’m not even trying to lose it? 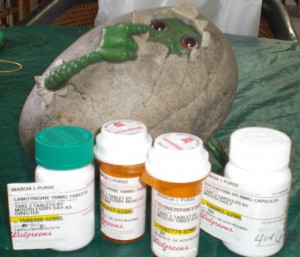 My Psych Meds in March 2015, accompanied by the hatching baby dragon

My medications (Cymbalta, Klonopin, Seroquel and Lamictal) are working very well at the moment. My mood is generally upbeat. I can handle housework in 5-20 minute increments without pain (depending on what the housework is, of course).

So damn it, I’m going to do this. I know it works, because it worked before.

You see, my biggest shame isn’t how I look and feel – it’s that for years I have made no effort to lose weight, in spite of constantly moaning about how fat I am. That has to stop. I need to be positive.

The first step: Replace frappuccino with coffee. Frappucino has 180 calories and 31 grams of sugar. Coffee with a tablespoon of creamer and Sweet’n’Low has about 18 calories and almost no sugar.

I’ll keep you up to date on my progress.

4 thoughts on “Bipolar Medications, Weight Gain, and Shame: A Confession”