At the beginning of March I was notified by About.com management that my contract, expiring March 31st, was not going to be renewed. After 17 years, I was out on my ear.

I started working at About Bipolar Disorder back in 1998 when my friend Kimberly Read, who was applying for the bipolar disorder topic, asked if I’d help her prepare her demo site. I knew nothing at all about bipolar disorder then, but I did know how to gather links, and the Mining Company, as About was then known, was at that time all about links to good internet information.

Kim got the site, and I continued to help her build it. Then a family illness made it impossible for her to do the necessary work of writing articles, and in order to keep her from losing the job, I began writing articles. They weren’t medical articles, but they were good enough to carry it along until Kim was able to return.

Eventually Kim told management I had been contributing a great deal to the site and asked if I could become her co-Guide. (We were called Guides until just recently, when they changed the title to “Experts.”) This was granted, and we started splitting the monthly stipend, which was all of $100 a month. 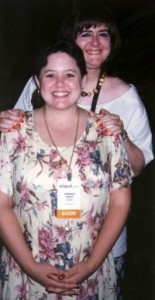 At that time, Kim and I had never met face to face. We’d gotten to know each other online in a roleplaying chat room. We finally met at the big convention in 1999 in Las Vegas. I was 5’10” and she was 5’1”. Our first hug required me to bend over a fair amount. 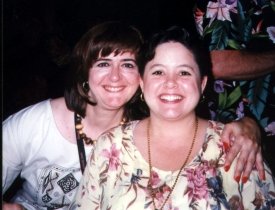 Just over a year to the day I’d started helping Kim, I was diagnosed with bipolar disorder myself. On that day I wrote the first entry of an online journal: What? ME? I’m Bipolar? I continued writing journal entries until late 2008, when my editor ordered me to stop.

Eventually, around 2007, Kim resigned. She was working full time, going to school to get her MBA, and raising two kids. It was too much for her, which I entirely understood, so I took over the site on my own. (By the way, she is close to earning her doctorate in Higher Education now. Yay Kim!)

And everything went along fine until 2011, when Google decided it hated About.com and stopped giving us good positioning in search results. About Bipolar Disorder was particularly hard hit. I’d been making good money up till then, but the drop in page views was like falling off a cliff. Suddenly my monthly pay went down, then down again, and again, and again.

About.com management did everything they could think of to help us Guides recover, and for some people, it worked. For me, it did not. I worked my ass off for two years without seeing any improvement, and began to burn out. I did less and less work, because there didn’t seem to be any point to it. More than once friends talked me out of quitting.

And I kept hoping something would change, that management would figure out what I’d done to earn Google’s wrath. But nothing did. I was making barely 25-30% of what I had made before the Panda II Google algorithm went into effect. (By the way, none of the evil things in this linked article were on my website, and I made every effort to clear up other problems like duplicate content. As I said, nothing made any difference.)

In 2014 I expected to be fired and was rather astonished when my contract was renewed. But a couple of months later I had a breakdown. I wrote about this in Crisis Survived.

I came within a couple of hours of quitting About.com that day – my son Joey talked me out of it. My daughter Angel began helping me write articles – I had to write a minimum of 6 a month, which for me alone was simply impossible at that point. With her help, I met all the required goals. Joey helped me, too, by finding images to illustrate the articles, which was one of About.com’s new initiatives.

Then at the beginning of March this year they fired me. Okay, not fired – gave me notice that at the end of the month, my contract would be nonrenewed. It felt like being fired. I was just numb the first week. Then… I realized I was glad. They’d made the decision I had not been able to make myself. No more writing about an admittedly depressing topic. No more busting my ass trying to improve my Google search placement without seeing a lick of improvement. I was done. I was free.

It was only a few days after the shock wore off that I started my new blog, Echo’s Gardens. I had written a blog here at the end of February, Garden Sadness, saying how much I wanted to buy plants but just couldn’t do it. In my newfound freedom, I realized that maybe I couldn’t buy plants, but I could renew and renovate my seven garden beds so they’d be ready for new plants next year.

So it’s farewell to About.com. Thanks for the good years. The bad years weren’t entirely your fault, though you didn’t make things easier and slapped me in the face hard once.

Thanks to Kim for getting me the gig in the first place. The picture of her below was taken at her wedding in 2003. And no, I didn’t dress like that for the wedding – the picture of me was taken a day or so earlier. 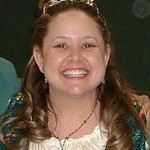 My best wishes to the person who becomes the next About Bipolar Guide – er, Expert. (Update: She turned out to be a sexy-looking psychiatrist who lasted less than a year.)

And thanks to About.com for kicking me out the door. I was ready to go and just didn’t quite know it.

4 thoughts on “Goodbye to About.com”