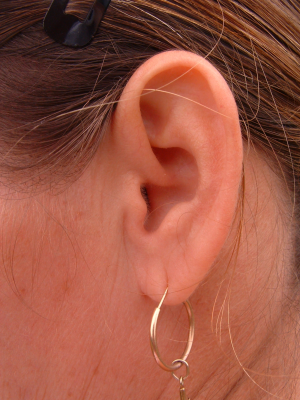 It’s all in my left ear

It isn’t ataxia at all. The reason I can’t keep my balance, even though I don’t get dizzy, is “vestibular dysfunction” in my left inner ear.

Even though my worst fall was precipitated by being dizzy from meds, it’s possible I wouldn’t have fallen if I hadn’t turned out the light, leaving the room in pitch darkness. You can compensate for poor balance with your eyes, to some degree.

And that’s what the physical therapy for this balance disorder does. Combining visual cues with a wobbly platform, the exercises retrain your damaged inner ear – somehow. They tell me that six weeks of twice-a-week therapy should be sufficient.

The exercises are not easy. One of them consistently causes my right calf to cramp up while I struggle to hold my balance and, at the same time, touch random lights on a board in front of me, alternating arms.

Another requires me to tilt the platform deliberately – it guides a ball on a screen around, trying to knock down enough coins to open the final target – and then get the ball into the target. This one is hard, though I did a lot better today than I did the first time.

The third exercise has me in front of a computer screen  filled with 3D tennis balls. Two of the balls turn orange briefly, then switch back to yellow. All of the balls move, then stop. I have to identify the two that were orange. I do fairly well on this one.

What causes this condition? In 87% of cases, I was told, the damage is caused by a viral infection. This makes sense to me, because at least three times in the 20 years I have gotten quite sick after airplane trips – fever with problems in sinuses and ears. I figured out it was the pressure changes forcing mucus from sinuses out into my ears, so now I always take a decongestant before a flight. But those three (at least) sicknesses could have done the damage.

I really hope this works. I’m tired of losing my balance when I stop and turn, or when I get up from a chair or sofa.

Meanwhile, what do I do if a cop stops me and wants me to stand on one foot? Tell him I have a balance disorder and request a breathalyzer test.