In the days following the accident where my beloved Dodge Caliber was smashed into by a semi I learned just how complicated it is to have an auto wreck. I gave a recorded statement to an Allstate representative. Allstate arranged for me to get a rental car. I had to go to the tow yard to pick up my belongings, where for the first time I saw the horrendous damage the poor car had taken. 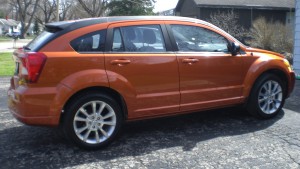 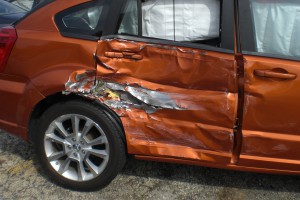 My left knee hurt a lot, and I had a colorful chest belt bruise, but all in all the Caliber had protected me remarkably well. Unfortunately, there was a LOT of stuff in the Dodge that had to be moved to the rental. I wasn’t supposed to drive into the yard full of damaged cars, but I was damned if I could carry all the stuff from the yard clear out to the parking lot with bad knees (it was my GOOD knee that had been injured), so I pulled the rental in and made the transfers there.

Since I was already having chiropractic treatment at the time of the accident, there was no way to say how much injury my back might have taken, but my chiropractor and I were pretty sure the wreck had undone most of the work he’d done up to that point. It just meant more treatment.

A few days later I was contacted by a property adjuster who had been to see the car and said he thought it was on the edge between being a total loss and being able to be repaired. The car was towed to a body shop, and a week after the accident I spoke to them. While the adjuster had put the damage at $6,500, the body shop, once they got inside the destroyed rear passenger door, found a lot more damage, and estimated it at $9,800. I think I knew then that I’d never get it back, but I kept calling the adjuster to get a final judgment. I got very frustrated – it took a full week for him to get out and look at it himself. Once he did, he declared it a total loss.

Today I said a final farewell to my poor much-loved car. With the crushed passenger rear door taken off and all sorts of stuff ripped out and lying inside, it looked so pathetic… but it protected me well in the accident, and that’s the most important thing. I picked up the plates and went through it one more time to see what was still there that was mine (there turned out to be quite a bit I had missed the first time).

Fear not, O car – I loved you well enough that I will be buying another one just like you. Thank you for taking care of me.

(A word to the police: Giving verbal instructions about paperwork to people who are dazed and crying after a car crash is stupid. There needs to be an instruction sheet that can be referred to later. I really don’t recall enough of what he told me to do.) END_OF_DOCUMENT_TOKEN_TO_BE_REPLACED

I didn’t see the big white semi till it was much closer than this.

On Monday September 21, as I was driving home from the chiropractor, I made a left turn at a stoplight to get to a gas station. Well, I made part of a left turn. In my peripheral vision I saw a huge white semi bearing down on me, blowing through the now red light. It hit the rear passenger door of my beloved Dodge Caliber.

I remember a thud and a loud noise of glass breaking. I remember a woman on a cell phone coming to my window asking if I was all right while she called 911. All I could say was, “I don’t know.” My left knee hurt a lot and so did my right breast where the seat belt was. 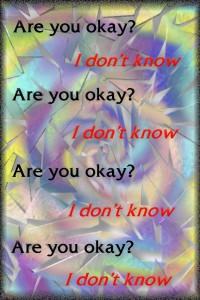 They kept asking me the same question, and I kept giving them the same answer.

I’m 65 years old and I’ve had a few fender-benders in my life (4 single car, one caused by another driver), but no major accident like this, EVER. I started to cry. I kept saying, “He blew the red light. He blew the red light.” The woman said, “Yes, he did, I saw it all.” I think she had been behind me in the left turn lane.

A policeman came, and then paramedics. They all kept asking if I was okay, and I kept giving them the same answer.

They helped me out of the car to check me out in their ambulance. I could tell that my injuries weren’t serious. I hadn’t hit my head or jammed my neck or broken anything. My left knee had apparently hit the steering column or dashboard, but the pain wasn’t sharp enough to indicate a break, and I had been able to walk from car to ambulance (albeit hanging onto the paramedic and shaking horribly). I signed a release (initialing in 5 places as well) and got out of the ambulance again.

(I’ll admit that part of the reason I did this was that I knew which hospital was closest, and I’d been to their Emergency Room before. It was a very bad experience and one I didn’t want to go through again.)

Question 1: Why do ambulances have such deep steps when they have to be used by people who are shaky and/or are hurting?

Already the car was about to be pulled up onto a flatbed wrecker. Not even thinking about everything important that was in it, I begged to be able to get out my cigarettes. “They’re not good for you anyway,” said the cop. If I had been thinking straight, I would also have demanded to get out my (only) house key and my garage door opener. I never even got to see the damage on the car, because the driver’s side was facing me as it was hauled onto the trailer.

Question 2: Why don’t people who do towing services not think of things like this themselves? How did they think I was going to get into my house? As a matter of fact, I have a battery-powered lock on my front door, so was able to get inside, but if not for that, I’d still be sitting on the front lawn. (There’s also an outdoor panel for opening the garage, but the battery is dead.)

GOD but I wanted my cigarettes!