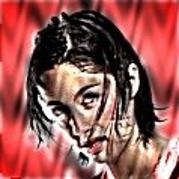 Daloki Mauvais was 37 when she came to Hellifyno, a human with extraordinary mental powers. She came by way of the Haven spaceport, an escaping stowaway, and dove through a portal, pointed out to her by a convenient, kindly stranger, that led her to Worlds’ Crossing. With the few coins she’d managed to steal along the way, she was able to get a penny-a-night room at the Inn of Worlds.

She’d shaken off her pursuers. She was safe.

The Innkeeper put her in touch with someone who got her a job killing vermin on a planet whose sole export was grain, accessible by portal from Worlds’ Crossing. The pay wasn’t much – a copper per 5 kills – but she was fast and accurate with a knife, and the job included a midday meal. From her co-workers, at the noon break, she learned something about the place that was her new home – that it was literally a crossing point between hundreds of planets, centered at the Inn.

Once she had made enough cash to get a room where she didn’t have to use the common bathrooms, to get better meals at the Inn than cornflakes for breakfast and beans for dinner, she was able to buy clean clothes – her standard garb of black pants and red t-shirts, along with the curiously padded red jacket she wore in all weathers.

When she finally had a few coins to spare, she set out to visit the place she’d been hearing a great deal about from others staying at the Inn – the Blue Moon Tavern on the planet Hellifyno.

Better she had stayed where she was.