I’ve just put up a new SharePost on HealthCentral, where I write in the Bipolar Disorder topic. Living Well With Bipolar II Disorder: Taking Charge of Your Time talks about a change in my life I’m really proud of.

It started in early November when I was talking with my son Joey via instant messenger. I can’t remember the details of the conversation, but it was probably me moaning about how overloaded and overwhelmed I was feeling. Something in our conversation inspired me that day (Joey’s good at inspiring), and I sat down with Microsoft Excel and created the schedule I wrote about in the SharePost.

I’d lived too long, too often, in a slosh of struggle, anxiety and desperation. Always feeling overwhelmed, always feeling inadequate, always beating myself up. There were some periods where using daily lists really helped. I could go on that way for quite some time, as long as my mood wasn’t too bad and nothing went wrong.

There were, and are, hypomanic periods where I had lots of energy, but I usually expend that energy on physical tasks like housework and gardening, not on work I get paid for. Face it – I don’t often get excited about working on my jobs. But they’re essential. They have to be tended.

Anyway – when I started making a schedule for the month at the beginning of the month, complete with topics for my required writing, the effects were instantaneous and lasting. Wow! Pressure eased. Confidence increased. Work done, on time, without turning into a frantic ghoul clawing at my own spirit.

Okay, so it’s only been three months – but I feel hopeful. What I’m doing incorporates many of the techniques I’ve found temporarily helpful in the past, all together. I don’t have to set it up every day, the way I did with daily lists, yet it helps me through the whole month.

What would happen if my bipolar disorder decided to smack me with a severe depressive episode is anybody’s guess. I think using this monthly schedule would still help.

So why do I say I’ve “sort of” taken charge of time? Because it’s not doing so well with non-work tasks. I put them in the schedule, too, but well – not as often as I need to, and of course they’re the first thing to discard if extra time for paid work is needed. My physical energy is pretty low, too. Maybe I need to look at these tasks in some other way…

Improvement is good. It’s been three months. Next month I’ll push to get physical. 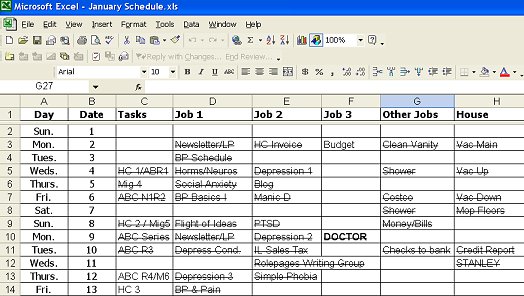